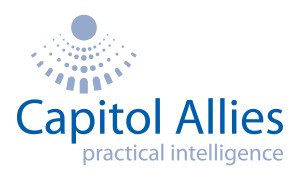 After 2008, the American economy struggled to recover from its worst economic downturn since the Great Depression. During the eight years of Barack Obama’s presidency, the only sector that experienced consistently expanding job growth was government. At the same time, he presided over the net loss of 210,000 manufacturing jobs.

After several huge doses of conventional macroeconomic stimulus, policymakers were understandably eager to find innovative ways of sustaining growth both in the short and long runs. In response to our economic challenge, Capitol Allies has been partnering with leading scholars, social scientists, think tankers, foundations, and other key economic allies to promote innovation and accelerate economic growth.

In recent months, the American economy has been reignited.

Our Six Degrees project is a specialized effort at turning policy into practice. Certain people and their networks are vital to advancing an idea and tipping a debate. Our excellence is mapping and traveling on a network that creates a climate of opinion and policy that is supportive of entrepreneurial activity, economic growth, and sound science.

Economic policy, sound science, and property rights are the hub of our issue portfolio. We have examined such topics as healthcare, technology and innovation, regulatory burdens, labor, tax and budget, energy, and political economy.

Capitol Allies was founded to further the principled interests of those we serve, to leverage and amplify the voices of those advancing ideas, to raise the resources necessary to advance an issue or idea and to create opportunities for strategic partnerships and allied relationships with the intellectual voices that matter most. The “six degrees of separation” notion is that certain people and their networks are essential to advancing an idea and tipping a debate. Capitol Allies employs the art of “six degrees” to create opportunities for our clients, allies, and partners—industry, think tanks, advocacy organizations, researchers, experts, and best advocates—to be heard by the right ears.

Alliance building is our core competency. Experience has taught us that the public conversation often lacks what James Madison called the “multiplicity of interests.” These interests surround our politics with the hope of influencing its outcome. Capitol Allies maps these interests—whether they are working in support or against any given issue—and acts strategically to accentuate the debate by connecting the contributions of these partial interests into a common purpose.

Targeted-Rapid-Grassroots Response (TRGR) through our partners at the Institute for Liberty (IFL) to generate authentic communications between constituents and lawmakers, as wells as citizens and regulatory agencies. TRGR also moves beyond the comment and letter-generating process, working with new technologies and mass media to elicit grassroots responses.

Salon events to reach an elite audience for the purpose of creating a public opinion tipping point. Over the past several years, we have worked to initiate the type of high-quality gatherings that help impact the public discussion. Our experience at these salons, and with impacting public policy in general, has taught the Primacy of the Personal.

The odds of having an opinion leader understand an issue is greatly aided by inviting him or her to an intimate dinner with a mix of fellow policy elites and exceptional journalists. Most importantly, the salon is a medium that allows the participants to continue the conversation long after the dinner has been enjoyed—it allows for ongoing networking, education, and relationship building. The dinners put formerly isolated thinkers, writers, and opinion-makers into contact with their peers. They allow influential people to get to know each other on a personal level in a pleasant setting. Civil—yet spirited—conversation is the order of the evening. The participants don’t always reach a consensus, but they do build respect and understanding. The dinners promote fair and balanced thinking.

Policy roundtables with key stakeholders, media, industry, and think tankers centered on specific economic issues. The purpose of these roundtables is to focus the policy and opinion-leader communities’ thinking on critical issues in a constructive way.

Selling an idea is all in the presentation. Recurring media and stakeholder gatherings are essential to advancing an idea. Regular engagement and concerted cultivation allows for a friendly convergence under the radar. These venues and the conversations that follow allow Capitol Allies to disconnect ideological blinders and take obstacles out of the way so journalists, media elites, and policy experts consider good ideas because of the context, method, and tone of the engagement.

Rapid response media through talk radio and op-eds, either in conjunction with think tank and policy allies or as a stand-alone Capitol Allies effort to impact the public discussion.

Policy analysis, such as papers, articles, and daily commentary, on key issues as they emerge.

A continuous media and stakeholder education campaign through which Capitol Allies reaches out to the most important shapers-of-public-opinion.